3 Questions and a Song

Learn about unsigned bands, of any genre, throughout the world through a very simple method, 3 questions and a song. Tune in as Bill Domiano of the Pennsylvania Rock Show introduces you to unsigned bands from anywhere on the 3rd rock from the sun! Bill will ask 2 questions, and the third question will be provided by the previous episode’s featured artist. Submit your band to be a guest on the show.

I recently had a chance to sit down and interview Chip and Maleena Dominick from Chip and the Charge Ups, as well as, Brian Gulish the Vice President, Marketing & Communications for the Greater Pittsburgh Community Food Bank. We talked about the new collaboration by Chip and the Charge Ups and local vocalists: Liz Berlin (of triple-platinum recording artist, Rusted Root), Doug Carnahan (of After The Fall, voted “Best Rock Band” in the Iron City Rocks Pittsburgh Music Awards for the past five years), Jen Craven (of emerging metal band, A Common Crown), and powerhouse gospel vocalist, Char Fields. Black and Gold Christmas. Don’t forget to purchase the track and the shirt! The sell of the accompanying T-Shirt is being donated to the Greater Pittsburgh Community Food Bank. In the interview you’ll learn about the making of the song, how to make donations to the food bank, and volunteer at the foodbank. You can listen to the interview (above), watch the official video, and read Patrick McElravy’s review below:

It’s the middle of November in the City of Steel. We just had our first decent snowfall, Thanksgiving is right around the corner, and Christmas is not so far off. It’s football season which means the black and yellow terrible towels are waving frantically throughout the city of Pittsburgh as people huddle up in front of the television or pile into Heinz Field for the Steelers. Stores everywhere already have good old Saint Nick up on display everywhere and Butterball Turkeys are flying off the grocery store shelves as fast as the stock boy can load them. It’s official, people, we have entered the holiday season…..one of the craziest, most stressful, fun, and most meaningful times of the year.

Now that we got the obvious out of the way, this time of year is a time of giving, gathering, and celebration. It seems as though Pittsburgh power pop band Chip and the Charge Ups are already way ahead of the game with their new holiday anthem “Black and Gold Christmas”. The seed for the project was planted ironically in the blistering summer heat of July. Singer/songwriter Chip Dominick and company would set out to write a Christmas-themed song portraying various landmarks and traditions about the city they love and hold so dear. Once the band had the general structure of the song mapped out they took things a step further: Recruiting various rock vocalists from the surrounding Pittsburgh area (After the Fall and A Common Crown to name a few). With a task as big as writing a strictly Pittsburgh-themed holiday song while collaborating with various vocalists, how would the end results turn out?

“Black and Gold Christmas” definitely hits in all the right places and some. The band do an excellent of creating a fantastic backdrop with melodic gusto and punch for the various singers to showcase what they each bring to the table. The first half of the “Yinzer” track allows for everyone to show their individuality, taking turns showing their prowess, but it isn’t until the back half of the song where we really see the magic really happen. After a short bridge, Chip acts a conductor bringing everybody back in for the grand finale. Everyone works together to display some impressive harmony work to build the ambiance. One of the most definitive qualities of “Black and Gold Christmas” is that it is fun and doesn’t take itself too seriously. Everyone is there and having fun and hanging out to make this holiday-laden tribute to the city of Pittsburgh. 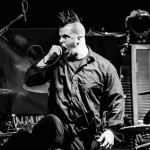 Patrick is lead singer of the progressive alternative metal band, 9 Stitch Method, and a music reviewer for First Angel Media & Build the Scene.